Hopi ear candling also known as Thermal Auricular Therapy is a deeply relaxing, calming and soothing treatment which assists the natural clearing of earwax from a person’s ear.  The candle creates a negative pressure which draws ear wax into the base of the candle, drawing out the debris which has been collected in the ear drum. 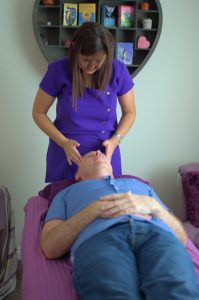 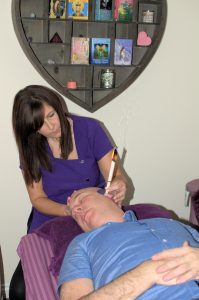 The ear candles are an all natural product carefully hand crafted according to traditional formulas. Together the contents of the candles have anti-inflammatory, antibacterial, healing analgesic, antiseptic, soothing and anti oxidant properties.

There are some Contraindications where Hopi Ear Candling should not be considered – among them are:

Ear candling can help with:

Each treatment includes massage to the ears, and a choice of massage for the face, neck or scalp. Reiki can be added if you wish.

Based on rituals used for centuries and in many ancient cultures, this natural therapy has been handed down to us from the mists of time to heal, calm and clear the head. Traditional practices faded out in some parts of the world, but in America the Hopi Indian tribe has kept the ear candling tradition alive. This tribe is renowned for its extensive knowledge of healing and spiritual lifestyle, and the practice of this treatment indicates a powerful healing tool both now and in former times. Scientifically, burning herbs has been shown to promote negative ions (which make you feel well and energised, such as those near a waterfall), and diminish positive ions (which leave you feeling sluggish, such as those found near electric pylons). Modern research has proved what the ancients instinctively knew, that this treatment works on physical, emotional and subtle energy levels.

HOW WILL I FEEL AFTER A  HOPI EAR CANDLING TREATMENT?

Deep relaxation and calmness.
Relief from stress and tension.
Possible tiredness, often leading to revitalisation.
Usually an improved sleep pattern.
Light-headedness or a slight headache due to the increased circulation and elimination of toxins, therefore drinking plenty of water is recommended.
Clearer sensations around the ears, sinuses and head.
Taste buds may be improved!

WHAT DO I DO AFTER A TREATMENT?

Rest for a few minutes immediately following treatment and during this time relax with a soothing massage of the ears, scalp, neck and/or face.
Keep your ears warm as they may be slightly more sensitive for a few hours.
Avoid water sports and swimming for at least 24 hours.
Cut down on caffeinated drinks and alcohol.
Drink plenty of water to keep your body hydrated and to flush out toxins.
Relax and take it easy for 24 hours, especially after a stimulating massage.

HOW MANY TREATMENTS DO I NEED?

Effects of a treatment can continue to work for up to 48 hours, so subsequent treatments should be at least two days apart.
Depending on the severity and purpose for the treatment, the frequency of treatments will be determined by the aims to be achieved.
Initially, once or twice a month  with follow up ‘maintenance’ treatments every six months.

WHY HAVE I NOT HEARD OF EAR CANDLING BEFORE?

The process has been lost to common knowledge for many years and only a small but growing number of people know about it. Because it is considered an Old Home Remedy, those people who do know about it probably gained the knowledge as it was passed on from generation to generation.

Some doctors do not endorse ear candling because they do not believe in it. Instead, they will wash the ears with syringe-like instrument: which may be very uncomfortable and sometimes extremely painful and damaging. If they took the residue from an Ear Candling and viewed the material under a microscope, they would see that it is living and active and the same substances that they are attempting to remove but ear candling provides a safe and relaxing treatment option for those who choose. Laboratory analysis has shown that the residue removed by Ear Candling consisted of ear wax, residuals from past infections, fungus, bacteria, yeast/candida, ear mites, worms, parasites, and hair etc. Ear Candling is not purported to be a cure-all, but in many cases, it has proven to be a successful and economic alternative.

Please note this is an holistic treatment  and will not cure serious defects in your ears or restore hearing loss, it  will however  improve your ear canal if treated regularly.

Ear candling is available for people living in or around Durham, Fencehouses, Sunderland and Tyne & Wear.